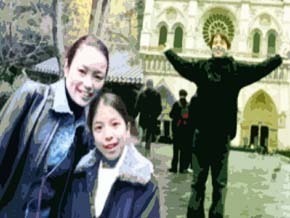 Bo Tu is Burmese. He’s getting ready for his novitiate ceremony, after which he’ll spend a whole week living like a Buddhist monk. While he’s waiting for the big day to arrive, he’s off with his mother to make an offering to the patron spirit of the neighboring town. He wants to pay his respects as a way of thanking the spirit for his parents’ good fortunes, and especially for enabling them to send him off to the monastery. He then heads off with his aunt to the capital, Rangoon, where the two pays a visit to the country’s biggest and most beautiful Buddhist sanctuary. Bo Tu still has plenty of time left before then, which is more than enough time to take a walk through the market and to sit in on a concert by his favorite band. When the day finally arrives to begin his novitiate, he’s more than ready and it’s one big celebration, for him and his whole family.