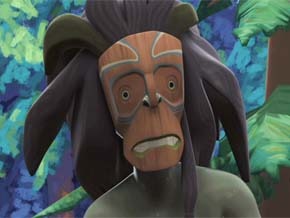 Caught in a storm at sea, the men find themselves shipwrecked on a strange beach and are captured by Bukwas an evil spirit who takes their souls. When the men don't return, Igis goes to Dzunukwa, who tells her that the men are with Bukwas. She sets out to sea with Raven, who seems more interested in fooling around than helping her find the men. Raven builds three stick men and dresses them with clothes and hats from the village and they spring to life, clumsily following him and Igis into the forest. Raven tricks Bukwas into playing a game, wagering Bukwas' prisoners against his own. Raven wins, then loses, then wins again, each time trading men with Bukwas, until the men are all on his side. Raven calls the game a tie, but Bukwas is angy at being tricked, and tries to stop them, but Igis fends him off with her spear until the sun emerges, scaring him away and they escape.