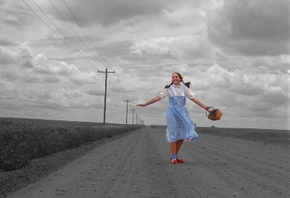 If Dorothy, from the Wizard of Oz were alive today, what would her dreams be made of? A trip to Walmart? What would she think of the war in Iraq? And what does home mean to all the young women who play her at the Wizard of Oz museum in the small American town of Liberal, Kansas?

Liberal, Kansas, is a small American town in which the fictional Dorothy grew up, realized the potential of such a tourist attraction. Teenaged girls dressed up as Dorothy (three Dorothy's per shift, six days a week) parade tourists along the yellow brick road to Dorothy's home.

Being Dorothy introduces us to several of these young girls, who like Dorothy suffer from the same wonderlust. These young girls. given the limitations of living in such a small town, so similar to the thousands of places just like Liberal all across North America, share their thoughts and aspirations and wonder what on earth am I here for?