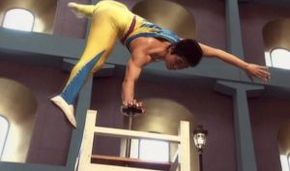 Ancient Chinese Sports takes viewers into a sporting world that few knew existed. This was a world that thrived centuries before the glory of the Olympic games. Beyond the martial arts and it acrobatics, few know of the colourful sports that were created in the courts of Imperial China. Just as the Ancient Greeks strove to salute their Gods with athletic feasts, we’ll see for the first time how the Chinese military strived for physical excellence in honour of their Emperors.

From the military warfare exercise know as Cho-Wan, an ancient form of golf- to the ceremonial role of archery, this short 12 part documentary brings the unique world of ancient Chinese athletes to life.

Through visual dramatic re-enactments, we learn how they lived, and how they played their games. Experts will reconstruct this little known world from stories that linger behind China’s rich tapestry of ancient sculptures, painting, legends and poetry. Our story will also trace the forces that brought China’s sporting traditions into decline, and track its subsequent revival as an athletic force to be reckoned with.