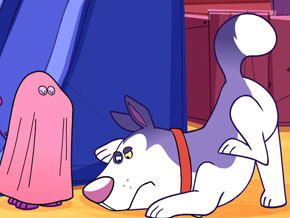 Pig Deal
The usually irrepressible Lucas is having a very bad day. He inadvertently breaks a water dish and then accidentally puts his paw in a pail of paint and leaves red paw prints all over the day care. Lucas slinks off into a corner. He wishes he weren’t so clumsy. Then he hears Rosie welcome a new charge for the day, a domesticated potbelly pig. Rosie sings the pig’s praises – so clean, so well mannered, such a pleasure to have around. Lucas decides that from then on, he’ll act like a pig. He asks the pig to give him ‘how to be a pig’ lessons and Lucas becomes extremely dull. Everyone misses the old Lucas and the crew has to convince him that they love him the way he was, faults and all.
Theme: Accepting ourselves for who we are

Small is beautiful
Lili arrives at the day care with an oversize blanket draped over her. It turns out her groomer got carried away and gave her a virtual buzz cut. Lili is so embarrassed at how tiny and (to her mind) funny looking she is without her fluffy coat, that she refuses to take the blanket off. The others try to convince her that it doesn’t matter what she looks like – they all look different in their own way – but she won’t listen. After a number of attempts her friends finally convince her that they accept her no matter how she looks.
Theme: Accepting ourselves no matter how we look

Sports Day
The dogs find a prize at the bottom of a new box of dog biscuits. They decide to hold a sports competition, and whoever wins the most events will win the medal. The dogs each win one event – except Lili who’s too small to do well in most of the events. She gets into a big snit and the others, feeling sorry for her, come up with some ridiculous, but Lili friendly events, like the ‘most sophisticated walk’, ‘the best body shake’ event, etc. Lili wins these events and since she has won the most events, wins the medal. But she says they should ALL have it for being so fair and making special events for her. They each proudly take turns wearing the medal.
Theme: Making someone feel good

Do the Itch
Pedro doesn’t pay much attention to his being itchy until he overhears Rosie saying she’s heard there have been a lot of fleas in the neighbourhood lately. Thinking that he will have to have a flea bath, Pedro tries to control his scratching in front of the others. Before long, Lili seems to have fleas as well. She’s embarrassed and soon enough she and Pedro are working together to keep everyone from finding out they have fleas. When they’re caught scratching, Lili and Pedro pretend they’re playing a crazy dancy-itch game to avert suspicion. Their concealment antics and excuses soon get more and more complicated, giving them both more stress than any cure would ever give them. In the end, Lili realizes it’s not embarrassing to have fleas and Pedro realizes that having a flea bath isn’t such a bad thing after all.
Theme: Overcoming embarrassment