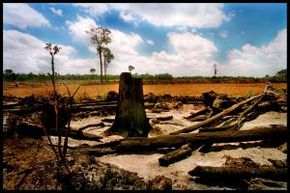 Soya, synonymous with nature and health has turned into Brazil’s Trojan Horse. This small bean, one of the most used vegetables in the world is dramatically affecting the Amazonian forest and its inhabitants. Millions of tons are needed and the new Eldorado for soya is…Amazonia.
The expansion of Brazil's soya market is fuelling an emerging cycle of deforestation. In 2004, deforestation in the Amazon reached a new record with over 24,000 square kilometres deforested, or the equivalent of half of Switzerland. In all, more than 16% of the Amazon has been deforested, or a surface equivalent to France and Portugal put together.

If this continues the impact could be disastrous because the Amazon, due to its immense territory, provides important environmental services to the planet and needs to be protected.

“When the last tree has been cut, the last river poisoned, the last fish captured, then you will discover that you cannot eat money.”

“I think that the problem of the Amazon can be resolved. But if there is no political action, it will be difficult to get the money and it will be hard to avoid the advance of the soybeans fields and the destruction of the forest.”