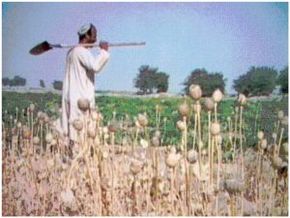 Over eighty-five percent of the heroin consumed in Europe comes from Afghanistan, where, despite the belligerent declarations of Western officials, production has exploded.

Poppy growing, which enjoys ideal climatic conditions in Afghanistan, is the only source of income for many of the country's small farmers.

How and why is opium trafficking between the Afghan mountains and the Kandahar market able to flourish so effectively?

The U.S. Army has initiated a series of ambitious operations to eradicate poppy cultivation, but is there a genuine desire to wipe out, or at least bring under control, drug trafficking in Afghanistan?

One thing is certain: nothing is going to stop the Afghan connection supplying Europe and the rest of the world with its deadly poison.

Shot under extremely perilous conditions, often with a hidden camera, this hard-hitting film tracks the production and distribution of heroin from the Afghan poppy fields to the veins of the users